This doll from Costa Rica is made from porcelana fria (cold porcelain). Cold porcelain is an inexpensive, pliable material that is used to mold figures. it hardens when exposed to air. The main ingredients are cornstarch and white glue. The little girl is sitting on a wooden stool. She is holding a straw basket with coffee beans, representing the culture of Costa Rica. 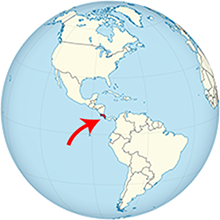 Tania looked around the plaza in San Jose (the capital of Costa Rica) for a good place to put her chair. As usual, the plaza was full of people. There were small groups of musicians singing Spanish songs and playing drums, guitars, and bamboo panpipes. A couple artists were using spray paint to create beautiful pictures. There were many street vendors who sold jewelry, clothing, or CDs by displaying them on blankets and umbrellas. “Yes,” thought Tania, “This is the perfect place to sell my Magic Coffee Beans.”

After she found a good place for her chair, Tania arranged her sign: Café Mágico - 30 colones. Then, she held the basket of coffee beans in her lap and waited.

“Bueno,” said Sra. Garcia, “That’s good practice for you to make change. Remember, though, that tourism is the number one industry in Costa Rica. There are many people walking around the plaza from all over the world. Perhaps you should also accept money from other countries.” Then, she helped Tania change her sign to read Café Mágico - 30 colones or 6 cents.

Tania was not happy when she saw her next “customer” approaching. It was Rafael from her class. He always teased her and made her mad.

“Tania, Tania, what are you doing?” mocked Rafael. “Those coffee beans are not magic! They look just like the coffee beans that are grown on the mountains near my house. What makes you think they have any magic?”

“Well,” replied Tania, “If coffee beans could change the history of an entire country, would you believe it was magic?

“Of course,” said Rafael, “But that’s not likely to happen. You are dreaming—just like a girl.”

Tania stomped her foot, and said, “Wait, I’ll prove it to you.”

Luckily Sra. Garcia was not too far away. Tania caught her eye and motioned for her to come over by Rafael. When Sra. Garcia arrived, Tania asked her, “Teacher, what made this sleepy little country into one of the most prosperous and stable countries in Central America?”

“Why that’s easy,” said Sra. Garcia, “It was the coffee beans that were imported in 1808. Like magic, the beans grew in the mountains by the volcanoes. They made lots of money for Costa Rica and became the leading export.”

As Sra. Garcia walked away, Rafael held out 30 colones. He still wasn’t convinced. But he bought some coffee beans just in case there was some magic in them. 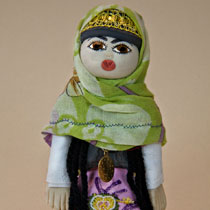