Male rag doll from Ireland. He has red yarn hair and button eyes. He is wearing a green corduroy pants with a shamrock on the bib. His shirt is green plaid, and his shoes match his pants. Tag: “Rory: The cuddly Irish rag doll.” 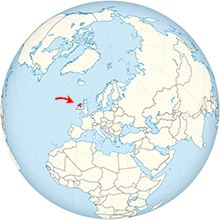 The Myth of the Giant's Causeway in Northern Ireland

My name is Finn MacCool and I was an only child. I live in a small town in Northern Ireland. Our home is near the coast at the northern tip of Ireland. Both of my parents were very big and strong. They could tear giant trees from the ground with their hands. They were giants compared to our neighbors.

As I got older, I grew very tall. I realized that I, too, would be a giant. I went to school and helped my parents farm the land. We had no horses, but I was strong enough to pull the wagons.

When I was 20 years old, I married my sweetheart, Oonagh.  We were very happy until another giant challenged me to a fight. The giant, named Benandonner, lived in Scotland. Scotland is located across the Irish Sea from Ireland. I had heard that the Scottish giant was even bigger than me.

We did not have a boat, so I decided to build a road from Ireland to Scotland. I wanted to go see Benandonner before I agreed to fight him. To build the causeway, I threw huge rocks and boulders into the sea. The rocky road created a bridge for me to walk across.

When I finally got to Scotland, I snuck up to Benandonner’s castle. As I peaked in the window, I was shocked. Benandonner was much bigger than me!  I knew I could not defeat him in a physical fight. So I turned around and ran back to Ireland along the Giant Causeway. I was scared. I knew that Benadonner would soon use the same road to come to Ireland.

That night Oonagh and I came up with a plan. Instead of fighting with the Scottish giant, we would try to fool him. Sure enough, Benandonner walked across the causeway the next day. He quickly found my house (it was the biggest one). He banged on the door shouting “Come out here Finn – I want to fight!”

Oonagh opened the door and said “Could you please be quiet, the baby is sleeping?” Instead, Benadonner shouted, “Where is that coward, Finn?” Oonagh explained that I would not be back for a couple weeks.  Just then, the baby cried in his crib. Benadonner walked over to look and was shocked. “That is a huge baby!” he said. Then, he thought to himself, “If the baby is this big, his father must be gigantic!”

At that point, Benandonner decided to retreat to Scotland. He never did realize that the baby he saw was actually Finn. It was me dressed in baby clothes to look like a giant baby!

Oonagh and Finn still like to laugh about how they fooled the Scottish giant. Just to be safe, Finn also removed most of the boulders from the ocean. That way, the Scottish giant would stay in Scotland, and Finn would rule in Ireland.

Many years have passed since Finn MacCool built the Giant’s Causeway. If you visit Northern Ireland, you can still see boulders along the shore. 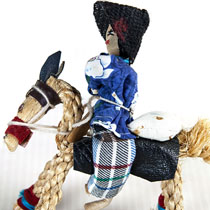