Thomas Edison figure. The male doll is made from cotton and felt material. He is stuffed with “bean bag” material and cotton. Thomas is wearing a blue cotton suit with an orange vest and bowtie. He is holding a light bulb in his right hand.

My name is Thomas Edison, and I was born in 1847. When I was young, I got sick with Scarlet Fever. After I recovered, my hearing was very poor. Because I couldn’t hear well, I got in lots of trouble at school. My grades suffered. Finally, my mother took me out of school. She taught me at home.

I loved to read, and I liked going to the library. At home I like to make things and experiment. I often took things apart to see how they worked. I thought it would be fun to be an inventor when I grew up. When I was 12 years old, I sold newspapers to passengers on the train. I also learned Morse Code from the telegraph operator. I was amazed that he could send clicks over a wire to other stations.

When the Civil War broke out, I worked for the Union Army as a telegraph operator. After that, I started inventing things. My first invention was an Electrographic Vote Recorder. This helped Congress record their votes faster. Next, I created a stock ticker that was used by New York stockbrokers. I also pioneered a telegraph that could send four messages at once!

When I was 39, I moved my family to Menlo Park, New Jersey. I built a company and a laboratory. The scientists at my lab helped me invent many more things. In fact, we registered over 1000 patents. A patent means we had sole rights to our inventions. Our inventions included a microphone for telephones and a phonograph that could record a voice and play it back. One year later, we invented the light bulb!  After that, we became very famous!

It’s true that I was not the first one to create a light bulb. However, my design made it cheap enough for everyone to use. I also invented the system to deliver electricity to homes.  I soon became known as the Wizard of Menlo.” Although I am not truly a “wizard,” I did show what curiosity and hard work could accomplish. 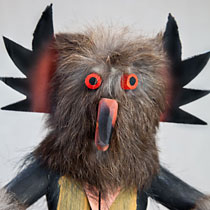