Male doll from Australia—an Australian swagman doll made with wire frame, covered by woolen cloth. Accessories that depict the Australian culture include bedroll, billy pot, walking stick, and swag. Tag on figure states: “The swagman was one of those early settlers – hard workers and adventurers, who in harsh conditions worked as labourers farmed, explored and built towns. This is a correct revival of the typical “SWAGGIE”. Designed, and, handcrafted in AUSTRALIA.” 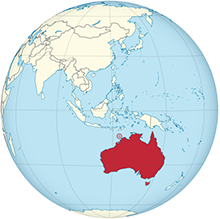 A Visit with an Australian Swagman and His Cattle Dog

The first time I saw a swagman, I was a bit frightened. He was very thin, and he had a rope tied around his waist to keep his trousers from falling. His wispy hair hung to his shoulders and was covered by an old felt hat. In the band of this hat was a wattle stem (the national flower of Australia). There were six corks hanging from the hat to keep the flies away from his face.

His name was Gunner Bill. He was always seen with his swag, which is a sausage shape roll that hung on his shoulders to carry food and blankets. He also had a billy—a small pot for making tea. He always seemed to have a smile on his face. As he passed my house, I could hear him singing and greeting our cows and sheep with a friendly, “G’day.”

One afternoon, I saw Gunner Bill walking slowly towards the bush (an Australian eucalyptus forest). Running next to him was his cattle dog. I decided I would follow the swagman to find out how he lived. As he walked down the dirt path towards the bush, I made sure that I stayed out of sight because I did not want Gunner or his dog to know that I was following them. Finally they reached a small tent that was leaning on a tree.

Suddenly, without warning, the dog leaped up and bounded towards me. I was very scared because he seemed ready to bite me. I heard Gunner yell, “Kipper—stop and come back.” The dog obeyed and retreated. Then the swagman called for me to come out towards him. I walked slowly to the man and stared at the swaggi’s gray eyes.

“Listen mate, you’re not the first lad to spy on me. I’ve traveled from one end of Australia to the other, and I have seen things you will never see in a lifetime. I guess that you can call me a professional swagman or hobo. I have no family, and I only own what’s on my back. I am willing to work for my keep and I don’t like to beg for tucker (food).”

I asked him to tell me more about his adventures. He did not hesitate—he seemed excited to have someone to talk to. His travels had taken him to many large cities of Australia. He started in Sydney, which has one of the world’s finest harbors. He worked as a stevedore on the docks, unloading and loading ships from all over the world. After a few months, he decided to leave Sydney and travel further south.

His next job was shearing sheep in Gundagai. He found his dog, Kipper, in Gundagai. Gunner told me about an Australian legend that involved swaggis and their dogs. The legend is that the dogs were extremely obedient—they would stay with the tucker box (sort of like a picnic basket) to protect the food from wild animals while the swaggis were hunting or roving. One day, the swaggis left and never came back (they went off to war). The dogs stayed to protect the tucker box until they died.

Gunner also spoke of the Aborigines who helped the swaggis as trackers or guides. These Aborigines knew the land so well they could find water in a country that seems waterless. They know where to dig in the sand for a soak or water hole. For food they depended on what they found in the bush. They ate roots, berries, seeds, witchiti grubs, snakes, kangaroos, and even Joeys (baby kangaroos). They slept in the open with no covering at all. When they camped, they made rough huts called gunyahs or wurleys out of branches. They were experts in the use of their native weapons such as boomerangs and nulla nullas. Most of them live in areas called the outback.  Gunner learned a lot from the Aborigines.

After I listened to Gunner’s adventures, he told me that I should go home before my parents got worried. He told me that he and his dog would be gone by the morning. He asked me to wait a moment as he went to grab something out of his tent.  He came back and placed a package into my hand.

When I finally got home, I went directly to my room and opened my gift from Gunner. As I was unfolding the paper, a note fell on the floor. There in front of me was the most beautifully carved boomerang that I had ever seen. It felt light and firm in my hand and I was thrilled to be its new owner. I picked up the note and read it. “Lad, I’m giving you this boomerang made by one of my Aborigine friends. He told me that this instrument is a weapon of defense and a symbol of friendship. For though friends might leave for awhile, it does not mean they will not return. Like a boomerang, I will return and see you again some day. No worries.” 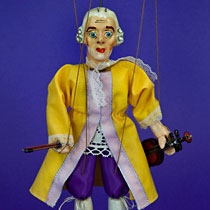