Female figure from Brazil in the South America. She is handcrafted from paper, burlap, and lace. Her face is painted on burlap, and she is wearing gold chain earrings and a necklace. There is fruit on her head and in the basket she is holding. The economy and culture of Brazil includes numerous fruits. 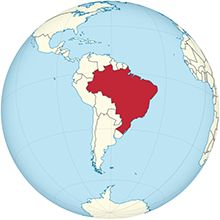 The Story of Carmen Miranda: The Lady in the Tutti-Frutti Hat

Hello. My name is Carmen, and I live in Brazil. No, I‘m not the famous Carmen Miranda, although I dress like her sometimes. I‘ll tell you the story about Carmen Miranda. Then you will know why I have a fancy dress and fruit on my head!

Carmen Miranda was a famous singer from Brazil. She was born in Portugal in 1909. Her family moved to Brazil when she was two years old. Portugal and Brazil because have the same language and customs. Portugal is a country in Europe. It is next to Spain. Five hundred years ago, the kings and queens in Spain and Portugal sent explorers to find new lands. Explorers from Portugal sailed to South America and found Brazil. Since then, many people from Portugal have moved to Brazil. Today everyone in Brazil speaks Portuguese.

Carmen and her family lived in a large city in Brazil. Carmen liked to sing, and she became famous. She sang songs related to music (called samba) that was brought to Brazil by African slaves. When Carmen sang, she wore long skirts and had fruit on her head.

Carmen wore fruit on her head because ladies in Bahia (a part of Brazil) put fruit baskets on their heads when they went to the market. Many different fruits grow in Brazil, including kiwi, acai, bananas, and passion fruit. The ladies in the poor sections of town took the fruit to the markets to sell it. They also sang and danced with fruit on their heads.

After Carmen became famous in Brazil, she went to the United States. She was very popular and appeared in many movies and shows. The fruit on her head became a symbol for Carmen and a symbol for Brazil. You may have heard one of Carmen‘s songs—Chiquita Banana:

I‘m Chiquita Banana and I‘ve come to say,
Bananas have to ripen in a certain way.
Bananas like the climate of the very tropical equator,
So you should never put bananas in the refrigerator.

When people see fruit worn on the head, they think of Carmen Miranda and of Brazil. She will always be known as the “Lady in the tutti-frutti hat.” 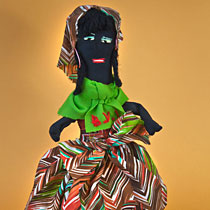