Figurine from Africa of a woman and baby. The figurine is made entirely with clay. She is wearing an African style head scarf and earrings made with gold wire. She is wrapped in a colorful blanket, and has a baby on her back. She has a large gold wire necklace. 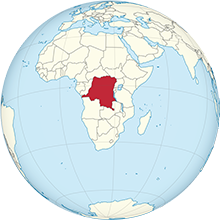 My name is Samy, and I live in the Democratic Republic of Congo. My home is in Kinshasa, the capital. French is our official language; we were known as the Belgium Congo until 1960. The Democratic Republic of Congo is a very poor country with lots of corruption. Most of our roads are made of dirt. Ninety percent of our homes do not have electricity.

Like other parts of Africa, we have lots of wild animals. For example, the Garamba National Park is home to elephants, giraffes, hyena, antelopes, chimpanzees and hippopotamus. We have lots of mines in DR Congo also, with copper, diamond, tantalum, tin, and gold.

Each morning my mother gets up at 4:30 to sell omelets in the local food market. As a single mom, she struggles to buy food and pay the rent for our small apartment.

My mother is a member of a very unique symphony orchestra, called the Orchestre Symphonique Kimbanguiste. She learned to play the flute by teaching herself.

A friend of ours, who plays in the orchestra, is a part time mechanic. He plays the tuba. Joseph, the violin player, works in a mine. All of the musicians do whatever they must to survive and support their families. In the evenings, almost 200 musicians join to rehearse with the orchestra. The love of music keeps them going, even though they live in one of the biggest, noisiest and corrupt cities in the world.

When the orchestra formed in 1994, the musicians had to take turns and share instruments. Armand Diangienda, the man who started the orchestra, said that many of the instruments were made from scratch or borrowed. Violin strings were made from bicycle wire. The sheet music was copied by hand. Music stands were put together from old pieces of wood.

Today, the Congolese orchestra is known throughout the world. Not only is it the only orchestra in Central Africa, it is the world’s only all-black orchestra.

As I sit waiting for the orchestra to begin, I dream of joining them in a few years. To me, music is a message of peace, love, and community spirit. 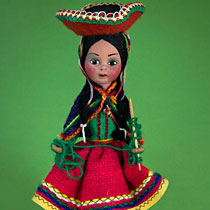