Ceramic man and woman dolls of worker in Cyprus. He is wearing baggy trousers with suspenders and a white shirt. On his head he has a maroon beret. His face is hand painted, with a mustache, eyes, nose, and eyebrows. He is carrying a load of sticks on his back. She is wearing a red polka-dot skirt, with a grey apron and white blouse. On her head she has a grey head scarf. Her face is hand painted, with eyes, nose, and eyebrows. She is holding a ceramic basket full of fruits and vegetables. They are designed to depict the culture of Cyprus. 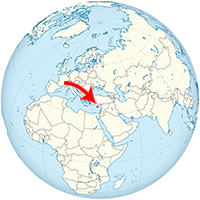 Honesty and the Golden Axe: The Greek Version of Aesop's Fable

Kostas and Eleni live near Paphos on the island of Cyprus. Cyprus is near Greece and Turkey. Part of the island is Greek, the other part is Turkish. There is a “buffer” zone between the two parts.

Paphos is a very famous city in southern Cyprus. It is said that the beautiful goddess Aphrodite rose from the sea near Paphos. Aphrodite is the Greek goddess of love and beauty. There are many gods and goddesses in Cypriot legends.

Kostas and Eleni have a small farm. They raise sheep and grow apples and other vegetables. One day Kostas went into the forest to cut some wood for a fire. As he was using his axe to cut a tree, the axe slipped from his hands and fell into the river. Kostas was very sad. He knew he was too poor to buy another axe.

The god who lived in the river felt sorry for Kostas. He got a golden axe and gave it to Kostas. “This is your axe.” the god of the river told the farmer.  Kostas replied honestly, “No, No that is not my axe.”

So the river god went back into the river and got a silver axe. “This is your axe.” the god of the river told the farmer. Again, Kostas told the truth, “No, No that is not my axe.”

The river god then went back into the river again. This time he brought Kostas his old axe. “This is your axe.” the god of the river told the farmer.  Kostas was very happy, “Yes, Yes that is my axe.”

The river god then went back into the river once more. He brought out the gold axe and silver axe again. “These are all yours. You are an honest and truthful man.”  The farmer ran back to the village. He told Eleni and all his friends what happened. He showed them the gold and silver axes.

A greedy farmer, named Ares, saw the golden axe and decided to get one for himself.  Early the next morning, he threw his axe into the river.  He pretended to be very sad about losing his axe.

The river god asked the farmer why he was sad.  Ares replied, “I lost my only axe, and I am too poor to buy another one.”  The river god went into the river. He got a golden axe and gave it to Kostas. “This is your axe,” he told Ares.

Ares was happy, “Yes, Yes that is my axe.”  The river god got mad and told Ares, “No this is not your axe, you are not being honest.”

The river god went back into the river. He did not let Ares keep any of the axes. 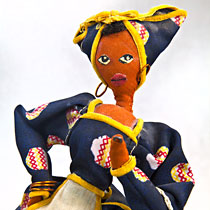 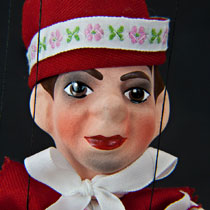