Male and female dolls made by stringing coffee beans together. The male has long dreadlocks on his head and armbands on his arms. The lady has a dress with pink paint and is wearing earrings. 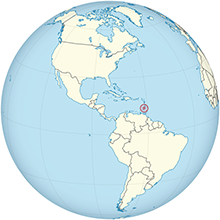 “Papa, papa, did you say that my cousin, Francois, is coming to Martinique from France next week?”  “Yes, Charlotte he’s arriving at the Fort de France airport.  I told him we would pick him up.”

My name is Charlotte, and I live on the beautiful island of Martinique. My island is oval shaped and lies in the Caribbean Sea. Martinique is a province of the French Overseas Department. Our laws are very similar to those in France. French is the main language.

The very first inhabitants of the island were the Arawak and Caribe Indians. Then, Christopher Columbus came here in the 1502. In 1635, the French took over and brought slaves to work in the sugar plantations. Over 200 years later (1848), slavery was abolished.

When it was time to pick up my cousin, my father and I drove to the airport. Since we had not seen Francois for many years, I held a large sign with his name. As the passengers walked out, I saw a boy waving his arms and shouting my name, “Charlotte, c’est moi.” He came running towards us and kissed us on both cheeks. This, I knew, was a typical French greeting.

We all woke up early the next morning and piled in the car for a tour of Martinique. Our first stop was a view of Diamond Rock. The “rock” is a volcanic island a short distance from shore. It is called “diamond” rock because it appears to glitter with the reflection of the sun. Also, it is in the shape of a rough diamond.

The next day, we drove to a volcano called Mt. Pelee. This volcano is near the city of St. Pierre. In 1905, over 30,000 people died when Mt. Pelee erupted. The people were killed by suffocation from the fumes and burning from the lava. They were trapped because the volcano erupted so suddenly. Even the governor of the island was killed when he tried to help others.

When we visited St. Pierre, Francois said he would never know that such a tragedy had occurred. Life in St. Pierre is just like other towns in Martinque. It was lunch time, so went to a restaurant that serves typical Martinque food. My father ordered Court-Bouillen (fish in a tomato sauce), which is the national dish. Mother chose Lambis, which is the Creole word for a large sea snail. For dessert, we all ordered sweet potato with coconut milk coated with caramel. It was delicious!

As we walked town, Francois said he wanted to find a souvenir for his mother. She collects dolls and loves coffee. There were plenty of island crafts to choose from, and he found the perfect gift – dolls made from coffee beans! It seems Martinique is famous for growing the first coffee plant in the Caribbean!!

Francois stayed with us for a week. We enjoyed his company and had a lot of fun. When he left, he said he would like to live in Martinique. He remarked, “The weather is great, the people are friendly, and the island is beautiful!” 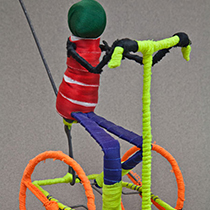 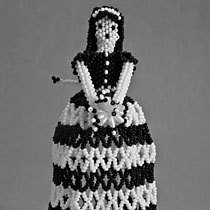