Hand made Raggedy Ann rag doll. Her face is embroidered with yarn, and she has the traditional triangle noses. Her hair is also made from looped yarn. Raggedy Ann is wearing a checkered top and bloomers. She has striped stockings and black fabric shoes. Johnny Gruelle, who lived in Indiana, wrote the Raggedy Ann stories for his daughter, Marcella, who was sick. He published the first Raggedy Ann story in 1915. These dolls were hand made by Shelley Stewart at the University of South Florida.

The Story of Raggedy Ann: A Labor of Love by Johnny Gruelle

My name is Johnny Gruelle. No, I don’t play with dolls, but I do write stories about dolls – especially Raggedy Ann and Andy dolls.

When I was young, little girls didn’t have Barbie dolls made from plastic or American Girl dolls with fancy hair-dos. Instead, mothers made dolls out of rags and other materials. In fact, my mother made a rag doll for my sister. The doll had hair made out of yarn, buttons for eyes, and a body made from rags. My sister loved this doll when she was little. When she grew up and forgot about the doll, Mother put it in the attic.

Many years later, I offered to help Mother clean out her attic. There were many interesting things in the old attic.  I found some of my old toys, such as a tin train, wooden horse, and a snow sled my dad made. When I found the old rag doll Mother made for my sister, I thought, “This might be nice for my daughter, Marcella, to play with.”

I took the doll downstairs, and noticed she needed a bit of fixing.  I asked Mother to sew on her missing eye and to give the doll a bath.

When Marcella saw the doll, she was thrilled. “What’s her name?” she asked. Let’s call her “Raggedy Ann,” I suggested. She was made from rags, and my favorite comic strip was “Little Orphan Annie.”

As Marcella played with Raggedy Ann, I was inspired to write stories about the doll. They were short stories full of Raggedy Ann’s adventures.

A little while later (in 1915), I found a publisher willing to sell both the Raggedy Ann stories and the dolls. The dolls all had yarn for hair, buttons for eyes, and a hand painted face. They wore calico dresses with a white aprons and had red and white stripes on their legs.

Unfortunately, my darling daughter, Marcella, died at the age of 13. She did not live long enough to see the joy that Raggedy Ann (who was later joined by Raggedy Andy) gave to millions of children. 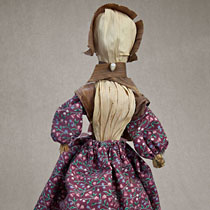