Ceramic doll dressed in national costume for the culture of Koivisto, Finland. The center piece in the front of the chemise is called the rekko. It is similar to smocking, with colorful embroidery. The woman’s skirt has a checkered top and a striped bottom. The linen apron is accented with several striped fabrics, laces and ribbons. The colorful patterns on the collar of the jacket are embroidered. Her headband is red with silver trim to simulate the tin or metal plates worn by young girls. She is wearing tan shoes. 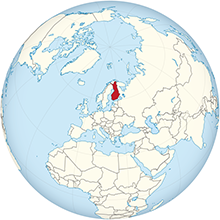 My name is Aino and I live in Finland. Many years ago, I was a young Finnish girl looking forward to marrying the man of my dreams. Sometimes dreams don’t come true. Thanks to my brother, Youkahainen, I am now a mermaid, and I live in the sea.

It all started when my brother entered a singing contest with an old magician (named Wainamoinen). Youkahainen was bragging that he was better than Wainamoinen. This boasting made the old magician angry. He used his magic to put my brother in mud up to his head. At that point, my brother became desperate, and he pleaded for his life. This poem tells how my brother got out of the swamp.

In the mire, his beard bedrabbled,
Mouth once boastful filled with sea-weed,
In the grass his teeth entangled,
Youkahainen thus beseeches:

“O thou ancient Wainamoinen,
Wisest of the wisdom-singers,
Cease at last thine incantations,
Only turn away thy magic,
And my former life restore me,
Lift me from this stifling torment,
Free mine eyes from sand and water,
I will give thee sister, Aino,
Fairest daughter of my mother,
Bride of thine to be forever,
Bride of thine to do thy pleasure,
Sweep the rooms within thy cottage,
Keep thy dwelling-place in order,
Rinse for thee the golden platters,
Spread thy couch with finest linens,
For thy bed, weave golden covers,
Bake for thee the honey-biscuit.”

Wainamoinen, old and truthful,
Finds at last the wished-for ransom,
Lapland’s young and fairest daughter,
Sister dear of Youkahainen;
Happy he, that he has won him,
In his age a beauteous maiden,
Bride of his to be forever,

Mom and Dad were happy when Youkahainen told them he promised that I would marry Wainamoinen, Our parents thought it was great that I would marry someone with magic powers. However, I was not happy! I did not want to marry an old man.

I cried and cried, but no one would listen. So I ran away from home. I ran through the forests until I was too tired to run any more. Finally, I fell into the sea and became a mermaid. Even Wainamoinen, with all his magic powers, could not catch me there.

From the Kalevala: The Epic Poem of Finland. Translated into English by John Martin Crawford (1888)