Cultural figure of woman holding a baby. The woman’s body is made from burlap, and she has yarn covered wire for her hands. Her apron is batik. Her face, and the face of the baby are hand embroidered with yarn. Her scarf is made from a rough net material. The doll is completely hand sewn. 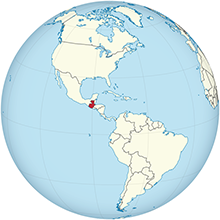 Mayan Story: The Rabbit & the Coyote

My name is Alejandra and I live in the mountains of Guatemala. My town is named Quetzaltenango, but everyone calls it Xela. It is a beautiful town that is surrounded by mountains, volcanoes, and valleys.  Most of the people who live in Xela are descendants of the Quiche Maya. The Maya empire lived in Central American over 1000 years ago. Then the Spanish came and ruled the countries. This is a story about a rabbit and a coyote that has been passed down through the ages by the Maya people. It shows that even though coyotes are faster, they are not always smarter!

One day the rabbit was leaning on a big rock when the coyote came by.

“What are you doing, brother?” the coyote asked the rabbit.

“Come here quickly, brother, the sky is falling down on top of us. Lean against the rock and hold it up while I go for a stick. We’ll prop it up with that,” said the rabbit to the coyote.

“All right,” said the coyote and began holding it up with all his might. Since the coyote was so stupid, he did exactly what the rabbit told him to. The rabbit had said that he was going to get a stick, but he went and left the coyote holding up the rock. When the rabbit didn’t return the coyote shouted:

“Come back, brother! The weight of the rock has made me tired.”

The rabbit still didn’t come back.

“No matter, I’m going to leave even though the sky may fall down on top of us,” said the coyote. But when he ran away he fell into a ravine. The rabbit never came back to the rock and the coyote was lost. 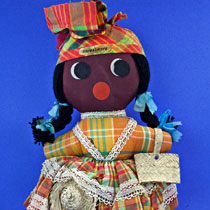