Handcrafted Italian witch doll. Her face, hands and feet are ceramic, and are very detailed. She is wearing large glasses, made from wire, and she has a wart on her face.  Riding her broom made from wood, she is wearing a bright, print shirt, a coat made of burlap, and sandals. She has a white scarf made from netting around her shoulders. She is carrying a black bag, and there is a piece of holly on her skirt. In Italian culture, she is known as La Befana, the Christmas witch, who leaves presents for children on January 6, Epiphany.

Italian Holiday Giver of Gifts: The Legend of La Befana

My name is Gianna and I am 11 years old. My family lives in New York City on Mulberry Street, which is a section where many Italian people live. My father owns an Italian grocery store. He sells lots of Italian foods such a cheese, pasta and delicious sauces. He taught me how to make salads, garnished with oils, garlic and spices. I often help make salads for customers in the store. As a “thank you” for my help, my parents bought an airline ticket so I can visit my cousins who live in the southern part of Italy. They wanted me to celebrate Christmas with my relatives, and I was really excited.

I arrived in Bari, Italy, two days before Christmas. My cousin, Sofia, who is 15 years old, offered to give me a tour of the city. As we walked through the streets looking at the holiday decorations, I saw a strange looking doll in a window display. I was confused because her dress looked old and torn, she had a witch’s hat, and she held a broom in her hand ready to fly away. I couldn’t understand why a witch would be included in Christmas decor.

Sofia and I stopped for a piece of Italian pizza. While we ate, Sofia explained that the witch’s name is La Befana, and she is an important part of Christmas culture in Italy. She is known as the Christmas witch, and she brings gifts on January 6. This is the legend she told me:


La Befana was a woman who lived in a tiny village over 2000 years ago. She often wore a shawl and a black hat. She lived alone because her baby son and husband had died. She could often been seen sweeping with a broom and cleaning her small cottage.

One night, three kings (the Wise Men) were following the North Star to bring gifts to the Baby Jesus. When they went through Befana’s village, they saw her sweeping outside her house. She invited them to rest and offered them some food. They asked her to join them in search of the Holy Child, but she said she was too busy. Before leaving, they asked her again to join them, but she said “No.”

After they left, Befana saw the bright light in the sky and realized that she should have gone with them. As fast as possible, she got her broom, packed some baby clothes for the Christ Child, and tried to catch up to the three Wise Men.

The legend has it that Befana searched and searched, but was not able to find the infant Jesus. To this day she is still searching. She flies on her broom every year (on the eve of Epiphany, which is January 6). She goes to every house that has a child. If the child has been good, she leaves gifts and candy.  If the child has been difficult, she leaves a piece of coal. In Italy, she is called the Giver of Gifts, and every child waits in anticipation of January 6.

Gianna loved the story about Befana. From now on, she would anticipate a visit from Santa on December 25 and La Befana on January 6 each year! 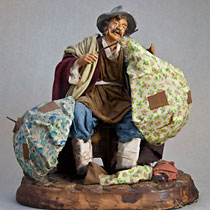 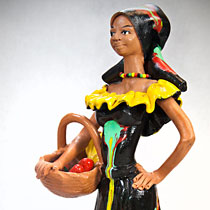