Ceramic figure of a man in Sicily who is fixing umbrellas. He is sitting on a stool with one umbrella on his lap and another at his side. The umbrellas are made with wire rods and cloth that is covered with lacquer. He is wearing a worn hat and his facial features are hand painted. Tag: “Si certifica che la presente opera deriba da una originale e personale creatibita Giobanni Alderisi.” To learn more about the culture in Italy, read the story. 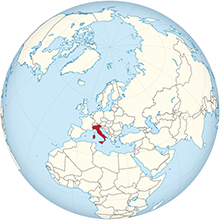 The Island of Sicily: A Magical Italian Island

There once was a man named Giovanni who lived in Sicily. His family is very poor, and he made umbrellas for a living. He also fixed broken umbrellas for tourists and Sicilian locals. Being poor was very difficult for Giovanni; he had to work all day just to make enough money to buy supper.

One day when Giovanni was fixing an umbrella for an old woman, he started to complain about how hard his life was. Suddenly, the woman looked at him and asked “Would you like to be a rich man?”  Giovanni thought that was a silly question so he said “Of course I would like to be rich; I would do anything to have lots of money.”

The woman smiled at him and said, “Then this is you lucky day. I have magical powers and I can make you rich. There is only one catch. You must leave Sicily and live at the Arctic Circle.  It will be very cold there, but you will be able to afford a beautiful house with lots of heat.”

“Wow” Giovanni said, “I can’t believe it—I would be rich and never have to work again?” She nodded, “Yes, you would have all the money you ever needed. You would never have to fix another umbrella.”

“But what about my country?  Sicily is the most beautiful place in the world!  I love hooking up my donkey to the painted wooden cart each morning. I enjoy my ride through the country past the vineyards, olive groves, and orchards with oranges and lemons. Living on an island is the life I want—I can see the ships in the dock from my cottage.”

“The choice is yours” said the woman. “You can live in Sicily as a poor man or live in the Arctic as a rich man.”

Suddenly Giovanni realized that he was not a poor man after all. He lived on one of the most beautiful islands in the world—just off the coast of Italy. It is a unique island full of art, history, culture and breathtaking scenery. He had many friends, and every day he met interesting people from all over the world. From that day on, Giovanni never complained again. 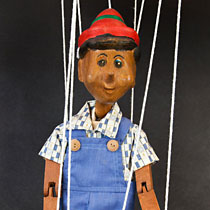 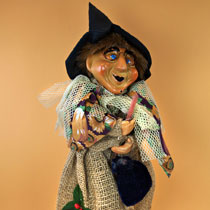