Female Herero fabric doll dressed in a yellow shawl and red and white patterned dress and headdress. She has earrings made from blue beads. Her facial features are embroidered on her fabric face. The Herero people live in Namibia. The long dress and shawl she is wearing were inspired by the missionaries who came to Africa from Europe. The hats are designed to resemble cow horns. They are common in the Herero culture. 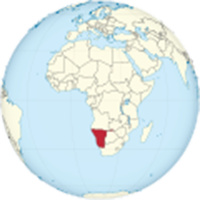 My name is Ndapewa and I live in Namibia, Africa. My family, like many Herero people, are farmers. We are very proud of our cattle. Every day we milk the cows and take care of them. In the mornings, we drink the sour milk (called Omaere). It is delicious! In Namibia, the more cattle you have, the richer you are.

Later, Englad ruled Namibia (which was part of South Africa at that time). Then, in 1990, we finally became a free country. Because of all of the wars, there aren’t many people left in our country.

Each year we have a festival, called Maherero Day to honor our leaders and the people who were killed in the wars. The parade at the festival is a beautiful sight with men in tribal costumes marching past their clan chiefs.

However, it is the Herero ladies who steal the show at the parade. Many years ago, missionaries came from other countries (like Germany and England). Women wear traditional dresses in the parade that look like the dresses the missionary women wore. The skirts are very full and long. To top it off, the women wear hats made of rolled cloth. The hats are shaped to look like cattle horns. That’s because cattle are so important to our culture. 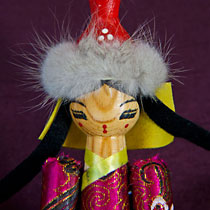 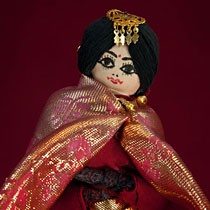