Paper Mache’ figure of Puerto Rican crab fisherman. He is kneeling beside a rectangular crab cage that is made from wire, and he holding a string with land crabs tied to it. The top of the cage is open, and there are additional land crabs in the cage. Tag says: “Creations de juela - Hand Made in Puerto Rico.” The figure is designed to depict the culture of Puerto Rico.

Location: US Commonweath in the Caribbean 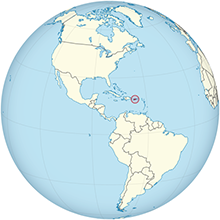 Fishing for Crabs in Puerto Rico

As the flight approached the airport in Puerto Rico, I could see the tall palms swaying along the shore of the Atlantic Ocean. My parents, who live in New York, wanted me to learn about the country where they grew up. They were proud to be Puerto Ricans, but had moved to New York to find better jobs.

I was eleven years old. I had been living in New York all my life and spoke English. My Spanish was also very good because my parents always spoke Spanish at home. As I was leaving the plane, I looked for my uncle. The airport was very noisy and festive, with a Puerto Rican band playing Caribbean music on guitars, quatros, tambourines, maracas, guiros, and bongos. Finally I saw my uncle. He was standing in the middle of the crowd,waving wildly.

We got on a bus and left the airport. When we reached the station in San Juan, we started walking towards the docks. The streets were full of people. Some had push carts peddling fruits and vegetables, such as mangos, bananas, oranges, grapefruits (toronja), papaya, bread fruit, and avocados (aguacates). My uncle stopped in front of a push cart with a large cake of ice and bought me a piragua. It tasted like cool candy and really refreshed me. When we reached the docks, we saw two huge cruise ships as well as the small ferry that would take us to my uncle’s house in Cataño.

Cataño is a town directly across the bay from Old San Juan. As we crossed the bay, I was able to see El Morro Castle—the great stone fort that was built to keep invaders out of the city of San Juan. Years ago, the British, Dutch, and French all attempted to conquer the island. The Spaniards finally took control and ruled Puerto Rico for 200 years. But in 1898, during the Spanish American War, the United States won Puerto Rico. Fifty years later, the Congress of the United States allowed all Puerto Ricans to become citizens of America. Puerto Rico is not a state; instead, it is a Commonwealth of the United States.

My uncle’s house was very small and he could not afford screens for the windows. Thank goodness Tia Maria made mosquito netting for each bed in the house. At first it seemed strange to sleep under a screen “tent,” but I learned to appreciate it when I saw how many mosquitoes there were! The next morning my uncle woke me with a nudge and told me he was going to take me out crabbing with the other crab fishermen. I was anxious to see what crabbing was all about, so I jumped into my clothes and met him in the dimly lit kitchen. I glanced at the clock with sleepy eyes and noted that it was 3:00 AM!

Before we walked to the beach, my uncle took me into a cement square building in the back yard. As we approached I could hear a faint clicking sound that reminded me of crickets. He opened the door and the sound became even louder. When I looked in the room, I saw many square cement blocks on the floor holding hundreds of squirming crabs in pools of water. I stared in amazement. I had never seen so many crabs in one place. He told me crabs were scavengers, meaning that they would eat just about anything. Before he could sell them, they had to be cleansed so no one would get sick by eating them. So, for three weeks, Uncle Felix fed the crabs corn, bits of coconut, and slivers of chicken to get them healthy and fat. He changed the water quite often. At first the water quickly turned dark and grimy, but as the weeks went by, the water started to stay clear due to the healthy food they were eating. In three weeks, the crabs would be ready to be shipped to the fish restaurants around the island.

Uncle Felix said we must hurry because crabs were caught when it was still dark. We picked up a wire cage and started walking along the beach. The only light we could see was from the El Morro lighthouse and the moon. After 30 minutes, my uncle stopped. He removed a powerful flashlight from his pocket and shone it along the shore. Suddenly hundreds of crabs came towards the light as if they were hypnotized. Felix grabbed the back of the crab’s shell and placed it into the crab cage. I flashed my light towards the water, and sure enough, a small army of crabs came towards me. I picked one up and suddenly I felt the pinch of the crab’s claw! “Ouch!” I said as I dropped it. Felix laughed and reminded me that I had to grab the crab’s back so the claws couldn’t reach my fingers. The next time I was successful, and soon my cage was filled with crabs. As the sun came over the horizon, we walked home. Working with Uncle Felix was sure different than the culture in New York. 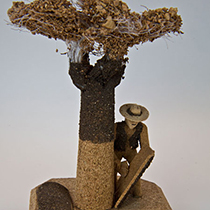 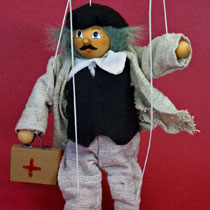