Handcrafted male marionette with five strings. His head, torso, hands and feet are made with wood. He is carrying a wooden case with a red cross on it (perhaps he is a doctor) His jacket and pants are made of linen, and he is wearing a felt vest and hat. 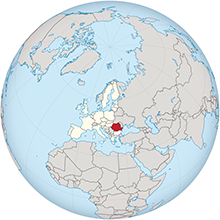 My name is Nadia Comaneci. I was born in the city of Gheorghi-Dej in the mountains of Romania. My country is very beautiful. It is in Europe, just south of Ukraine. After World War II, we were a part of the Soviet Union until 2007. The central part of Romania is called Transylvania. And, yes, it is most famous for the stories of Dracula. A Romanian, Braun Stoker, wrote the Dracula book.

I fell in love with gymnastics when I was very young. I practiced hard each day. In fact, I was only 6 years old when I was invited to join the Romanian junior gymnastic team. My parents readily agreed. For the next six years, I trained about 3 hours each day. My coach was a man named Bela Karolyi. A couple years later, I won the Romanian National Junior Championship.

I was only twelve when I left home to live and train at the national training school. I trained with Coach Karolyi for eight hours a day, six days a week!  The hard work paid off, however.  Two years later, I became part of the Romanian Olympic team.

I was a mere 86 pounds when I traveled to Montreal, Canada, to participate in the 1976 Olympic Games. As the world watched, I stepped up to the uneven bars. I took a deep breath and mentally reviewed each jump, swing and twist. I had done this routine many times before, but I was nervous.

With one final glance to my coach, I started the routine. As I finished, I looked at the scoreboard. Soon, the score appears – it was a 1.0 (on a scale of 10). I was horrified that I received such a low score. Instantly the announcer explained that the score was a perfect 10. No one in the world had ever earned a perfect score – the scoreboards were not designed to display a 10! What a thrill to be a world champion with a score that could go no higher.

My flawless streak continued at the 1976 Olympics. I stunned the world by earning perfect scores on the uneven bars and balance beam. I returned to Romania with three gold medals. The Romanian government was so happy that they gave my parents a vacation and a new car!

Four year later, at the 1980 Moscow Olympics, I was 18 year old. I went home with two gold medals and two silver that year. By 1984, I was too “old” to compete in gymnastics. By then, my coach, Bela Karolyi had defected to the United States and was coaching their team. The Romanian government did not want me to defect so they watched me very closely. Finally, eight years later, I found a way to leave Romania. I had to sneak away at night and walk for six hours to Hungary. After that, I flew to the United States.

Today, I live in the United States with my husband (who was also an Olympic athlete). I continue to coach and promote gymnastics. 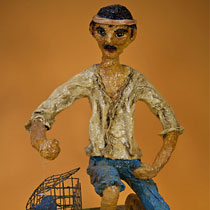 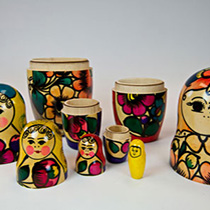