A whole string of tiny islands form the “country” of Turks and Caicos in the Caribbean. This handcrafted figure is made from woven palm leaves and fiber from the sisal plant. The words, Turks and Caicos, are woven into the front of the woman’s straw skirt. She has yellow and orange straw pom poms on her hat and shoes. She also has green flowers and leaves woven into the skirt. 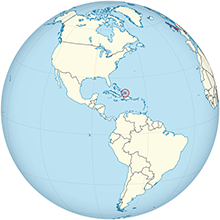 Turks and Caicos: A British Crown Colony of Islands in the Sea

My name is Calle, and I guess you could call me a tomboy. I have more fun going fishing with my father and brothers than staying at home. We live on a small island (called North Caicos) out in the Atlantic Ocean, about 550 miles southeast Miami, Florida. There are a whole string of tiny islands that form our “country” of Turks and Caicos.

When I go fishing with father, he always tells stories about our islands. I really like to hear the story about my grandmother, who was called Mama. Like most people on these islands, Mama was a descendent of British slaves. The slaves were brought here during the American Revolution, when the British soldiers lost control of the United States. The soldiers thought they could grow cotton, fruits, and vegetables on these islands, like they had in Virginia and Georgia. They soon discovered that the hard, sandy soil would not support these crops. At that point, most of the British left for England, leaving the slaves behind to fend for themselves.

The slaves soon learned how to fish and live off the sea. Snapper, grouper, tuna, wahoo, and other fish are plentiful here. The coral reefs are great places to fish with fishing poles, fishing nets, or by diving down into the clear waters. The people also ate conch and lobster from the ocean.

When Mama was 16 years old, she married Nigel. They were poor, but they had plenty to eat because Nigel was a good fisherman. Nigel and Mama were very happy, and they had six children. Then, one day, a tragedy happened. Nigel went out in the boat to check the lobster traps and was caught in a storm. The boat turned over, and Nigel never returned.

Mama cried and worried about how she would feed her children. One of her friends suggested that she could make crafts to sell to the tourists who come to the Turks and Caicos. Airports had recently been built on Providentiales and Grand Turk (two “large” cities), and tourists were coming to the islands to dive on the coral reef and fish in the clear waters. Mama thought about it and decided to make dolls and baskets from plants. One of the plants that grows well on these islands is sisal. Sisal contains a strong fiber that can be used to make ropes. By weaving this fiber, along with some palm leaves, Mama was able to make beautiful crafts.

Over the years, Mama’s dolls and baskets became famous all the way from the Bahamas to Jamaica! Before she died, she taught her daughters how to weave. Now my mother makes dolls to sell to the shops. Someday I might also make dolls from sisal and palm leaves. But, for now, I’d rather go fishing! 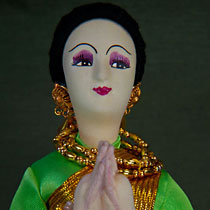 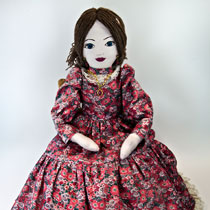