Panning for Gold in California: Not Everyone Struck it Rich

My name is Joshua and I was 12 years old. A year ago (1848) gold had been discovered in the hills of Sutter Sawmill, California. My dad had a blacksmith shop in Missouri, but he decided to try to “strike it rich” by going west to California.

The passage to California was not an easy journey. We had a horse and wagon, one donkey and our dog, Rover. Our dog lead the horse and wagon and barked each time some animal or stranger crossed our path.  At night, Rover was our eyes and ears. He yelped whenever some wild animal came close to our campsite. I felt safe with Rover at our side.

When we got to Sutter Sawmill, we spent each waking hour trying to find gold. We did this by panning in the streams. We used the pans to scoop up sand from the bottom of the streams. After swirling it around, gold settles at the bottom of the pan, since it is heavier than sand. Most of the time; however, no gold was found.

The majority of the gold seekers lived in tents along the rivers. It was a hard life. The only ones who made a good living were the merchants. We had to buy tools; we had to buy food; and we had to buy clothes. Every merchant charged us very high prices for what they sold.

My dad and I stayed in the hills for over 6 months. We worked from dawn to sunset every day. However, we were not very successful. In fact, we had barely enough money for food. Finally my dad gave up. He said he was going to town to buy a few provisions. He wanted to start the long trip back to Missouri the next day. He said,” Josh, we came here with nothing and we will leave with nothing.”

After dad left for the store, I decided to pan one last time. Rover was with me, and I let him lead the way to the stream. He stopped near a bend in the river that didn’t look too promising. However, I took my shovel and began digging into the soft wet earth. As I dug, it seemed to l hit an underground stream. I dumped some of the dirt into my pan and swirled it around and around. I couldn’t believe my eyes when I saw some tiny, gleaming pebbles.

When Dad returned, I showed him the shiny objects. He scooped them up and with a great deal of emotion he stated, “Rover has led us to the gold.” He placed the gold into a leather pouch. I thought to myself at the time that if Rover had not been with us we certainly would not have been able to leave the hills of California a lot richer than when we came. At sundown, we ate our supper, climbed into our tent and went to bed. The next day we headed east – with plenty of food and other provisions for the trip. 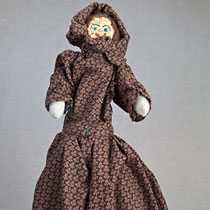 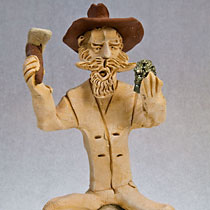