Lady from Venezuela who is handcrafted from wire that is covered with felt. She is wearing a hat made of burlap on top of a cotton scarf. She has a cotton print skirt with lace trim on the hem and a shawl that is made from felt. Her purse is hanging around her neck. 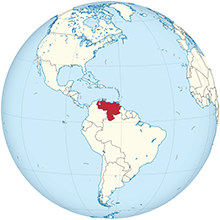 My name is Maria, and I live near Caracas, the capital of Venezuela. My family is very poor. We live in a small shack on the mountains near Caracas. Sometimes, at night, I can see the bright lights from the city. Caracas has big buildings, restaurants, and hotels. Many companies have offices there. Oil was discovered in Venezuela a few years ago, and some people made a lot of money. Caracas is on the north coast of South America.

We don’t go to Caracas very much. Instead, we do things with our family and church. For example, my brother loves to play baseball, and we watch his games. On Sunday, we go to the Catholic Church to pray. And, in the spring, we celebrate at the Carnival. Carnivals are fun—we get dressed up, dance, and eat. Sometimes my father goes to bullfights. I have not been allowed to see one yet.

I go to school, and I learned that Venezuela was “discovered” by Spanish explorers many, many years ago. When they landed on the coast of South America, they saw Indians living in stilt houses. The Indians were using boats that were shaped like gondolas. The country looked like Venice, Italy, so the explorers named it Venezuela, which means “Little Venice.”

Venezuela is a big country, and many people do not live on the coast. We have mountains and rainforests too. If you like animals, you can see jaguars, bears, and holler monkeys in the mountains. They are called holler monkeys because they make so much noise. It’s fun to see them playing in the trees. We also have the world’s largest rodent—called the capybara. It grows teeth like a rat or mouse, but it looks more like a pig. Some of the capybaras weigh 100 pounds—that’s more than I weigh! Actually, capybara tastes good. It’s a real treat when we have capybara for dinner.

Our rivers have lots of wildlife too. You might see lizards, iguanas, boa constrictors, and anacondas. Anacondas are the longest snakes alive! They can grow to more than 30 feet (10 meters). Oh, I almost forgot—we have piranhas in our rivers too. Some of the piranhas are called “man eaters” because they will attack swimmers.

I hope I haven’t scared you away! Venezuela is really an interesting place to live. Perhaps if the Spaniards had realized that the country was so big (bigger than Texas and Oklahoma), they would not have called it “Little Venice!” 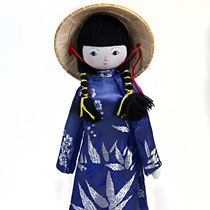