Vietnamese Lady dressed in traditional Ao Dai, which has slits on the side of the blue and silver silk dress. Her dress is made of the blue and silver silk, and is worn over white pants or trousers. Her eyes are small black sequins. She is wearing a conical straw hat (known as a Non Bai Tho) that is tied with a red ribbon. Her hair is black yarn, and is tied with yellow string 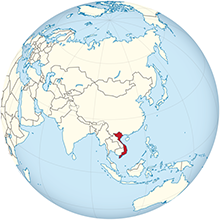 A Letter from Vietnam

Le’s cone-shaped hat (called non bai tho) was tilted back on her head to keep the rain from drenching her hair. She worked in her father’s rice paddy in Vietnam. The day was warm, but the fresh rain coming down kept her cool. She worked hard, bending over in the marshy field as she loaded her basket with the ripe rice plants. Many other workers were also picking rice plants for this was the harvest season.

Farming in rice paddies is hard work. Prior to the rainy season, they planted the seedlings and flooded the area. Then they waited for the grass to grow. When the seedlings sprouted, they drained the field and collected the grain. The farmers then separated the good grain from the bad grain. Next a machine would skim the rice from its husk. The husk or shell of the rice was used for cattle feed. Sometimes the husk would be burned as fuel for a fire.

Le’s family was not rich, but they were able to feed themselves. As Le worked gathering the rice plants, she was thinking of a letter she kept in her pocket. It was from a pen-pal in America.

Le had been learning English at school and she liked to practice. Some of the children in Vietnam do not go to school all the time though. When it is planting time or harvest time, they must stay home to help their parents on the farm.

Le’s teacher had given her the address of another Vietnamese girl, named Wo, who lived in New York City. A month ago, Le wrote Wo a short letter telling her all about Vietnam. Wo does not speak Vietnamese and Le was afraid that her English would not be good enough. Le was very happy when Wo wrote back!

Wo told her that she lived in New York City in a very tall building with many apartments. She said that the building was so high that they had what was called an elevator to get people up and down in the building. She told Le that she went to school 10 months out of the year. She also wrote that one of the tallest buildings in the world was in New York City (the Empire State Building), and it was 110 stories high.

As Le looked at her little village, she could not imagine such a large building. The tallest structure was only 3 stories high and that belonged to the mayor. Le lived in a wooden house with 4 rooms and a tin roof. They had no plumbing or bathrooms. Instead, they used an outhouse. Her mother cooked on a stove that burned wood or rice husks.

The kitchen had no running water either—they had a well outside. One modern feature in the house was electricity. They were one of the few families who had this luxury.

It was now getting dark and Le’s work was finally finished for the day. She wanted to get home to answer the letter her American pen-pal had sent. She ran into the house and washed her hands and face in the basin of water. Then she dashed to her room to write. This was her letter to her New York friend:

I wishes you can understand my England for me knew I need very many practices. I today work in field of rice. I am happy to receive your letter. I have brother with 6 years. My mother now cooks food. I smell fish in the wooden fire and the rice in big pot. We eat many kind of vegetables. We are the Catholic and always said prays. Possible day I be lucky visit you.

The people in mine land very poor. I preserve money in order to send a shade hat for you. This hat wears good in sun and the rain. It called non bai tho —hat with words to rhyme. And when the girl wants to party she wear ao dai—pretty dress. She puts on the white silk pants under the clothes. I do not have this kind of clothes not to have the money for my family to buy it. Has me to want to tell you many matters only me to hear I the mother tells me to eat. Fast please write. 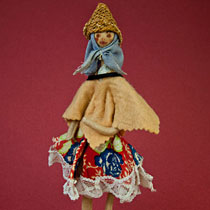 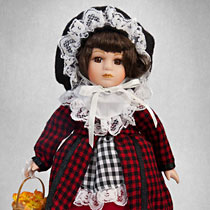