Photo of Welsh doll in national costume, which consists of a black hat, white frilled cap, long dress, white bloomers, and woven coat. She is dressed to celebrate St David’s Day, which is celebrated in Wales on 1 March. Her tag says “Name is Cerys, Leonardo Collector’s Porcelain Doll.” 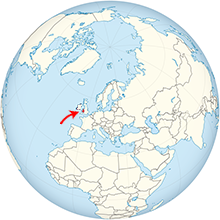 A Doll for St. David's Day: The Patron Saint of Wales

The day was overcast and very little of the sun could be seen. It was February 28th, the day before St. David’s Day. Little Cerys was waiting for her grandpa to take her to Cardiff, the capital city of Wales. Wales is a small country in the United Kingdom. It is right next to England.

Cerys lived with her grandparents on a small sheep farm. She was awake early and was ready to go to the train station. It would be her first trip to a place so far away, and she was anxious to go to the city and buy a doll. Cerys wanted to find a doll that was all dressed up in the traditional clothes that most Welsh girls wore on St. David’s Day. St. David is the patron saint of Wales, and St. David’s Day is a very important holiday.

The train ride was very long, but Cerys loved to look at the beautiful mountains in Wales. When they reached Cardiff, the train station was filled with many people. Cerys held her grandfather’s hand tightly for she knew that if she got separated, it would be almost impossible to find him again. As they stepped out of the train station, the tall buildings and motorcars almost took her breath away.

Grandpa had been to the capital many times before, and he knew where to look for Cerys’s St. David’s Day doll. As they walked along, they saw stores of all kinds. The television sets, computers, modern furniture, and dress shops all seemed like an endless parade to Cerys’s eyes. They walked for almost an hour. Then Grandpa squeezed her hand and stopped.

Like a magnet pulling her, Cerys saw the most beautiful dolls she had ever seen. They all wore dresses with aprons, red cloaks, and a tall beaver hat over a white bonnet. Directly in front of Cerys was a dark-eyed doll with brown hair. She was carrying a basket of daffodils, which is the traditional flower of St. David’s Day.

Cerys stood there, as if in a trance, imagining that she was holding the hand of Saint David instead of Grandpa. Suddenly she felt a squeeze and looked up at her grandpa, who was smiling at her. They walked into the store, and without hesitation, Cerys ran to the dark-eyed doll and hugged it. The porcelain face, with its marble-like black eyes, seemed to be smiling at her. The saleslady wanted to place the doll in a box, but Cerys insisted on carrying it in her arms.

When Grandpa and Cerys boarded the train for the ride home, Cerys immediately fell asleep. As she cradled the St. David’s doll in her arms, she dreamed about how proud she would be when she showed her doll to all of her friends. 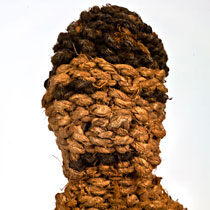